He was born in Athens in 1797. He spent his first years in the USA, as a third generation immigrant. Then, he went to school in Athens until 1993, when he moved to Paros. He lives and works in Naoussa, in Paros and he pursues many activities and hobbies. 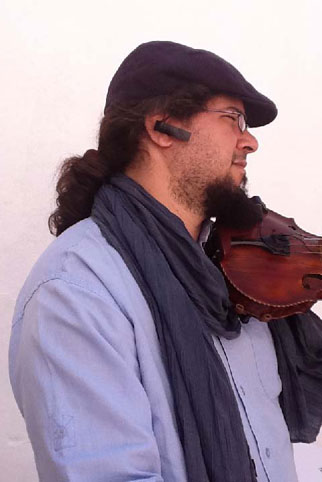 He dealt with music for the first time when he was 12 years old, when he started playing the bouzouki. Then, he started playing the laouto and the violin, influenced directly by the musical idiom of Paros and of other islands. He was an autodidact up to the moment when he met Nikos Papadakis from Lefkes, who was his first teacher and who later became also his good friend and cooperator.

During his studies in Athens, (he graduated from the School of Commerce Advertising and Sales Promotion), he took classical violin lessons at the conservatory "Nikos Scalkotas" from Nikos Haliasas and traditional violin lessons from Nikos Oikonomidis.

He was a member of the traditional musical and dancing group "Naoussa Paros". He participated as a violinist in many music and dance festivals in Greece and abroad and he cooperated with many artists such as Nikos Oikonomidis, Spyros Polikandriotis, Stamatis Hatzopoulos, Leonardos Bournelis, Dimitris Papadopoulos etc.

At the same time, he picked up photography during the last ten years, concentrating on travel photography and landscapes. It was only recently, in 2011, that he decided to publish a part of his work. He participated in a group exhibition in the summer of 2011, and in January 2012 he exhibited some of his works at the "MONOPOLIO OF ATHENS".

After music and photography he also dealt with sound technology and audio engineering, in the field of live shows and sound recording, a field which is directly associated with music and its effect on the audience. In 2002, he co-founded with Nikos Papadakis the art installations company “violin productions", for the logistic support of shows and events in Paros and elsewhere. He was a founder member and violinist of the band “delaparo”, which was created in 2007, in Paros, and which gives traditional folk music concerts all around Greece.

In 2010 he co-founded the first professional recording studio in Paros, in order to make the island a destination for all arts and for artists from all over the world.