Antiparos features a fully organised hiking trail network, across all levels of difficulty, with 12 signposted routes, though some are under construction. Full details as well as maps are available at antiparosroutes.com

An 1.5 hours circular nature trail. Suitable for all ages and states of fitness, recommended for afternoon strolls and sunset views, it stretches along the main paved road of the village and into Routes 1A & 3.

Route 1A: Up north

The first kilometre of the route takes you up to one of the northernmost capes of Antiparos, named after its compass point. At the end of the trail you get the treat of taking a dive in a bay of pristine and wild beauty. The route, an 1.5 hours return hike, is of medium difficulty and connects with routes 1A & 3.

Route 2: The wetlands of Antiparos

Along this route you come across a couple of wetlands, namely "Upper Psaraliki" (Pano Psaraliki) and "Old Alyki Lagoon" (Limnothalassa Palias Alikis), awarded special status in the national list of small island wetlands. This family-friendly route, due to its minor difficulty, leads ideally to the beach of Panagia for a refreshing swim, with a total return duration of 1.5 hours.

This trail unravels on top of a hill, from which you can enjoy views of the Village and, a bit further away, two fishing sites, while it is also suitable for mountain biking. Level of difficulty: easy. It is suggested to take the asphalt road that connects Livadi with the Village on your way back.

This is a sightseeing route, it lasts two hours and connects with Routes 1, 1A & 5.

The "Upper Road", according to oral tradition, was one of the back roads connecting the village (Kastro) with the settlement of Ag. Georgios. After soaking in "Upper Road" history, you end up on the beach at Monastiria bay, ideal for a swim before crossing uphill Kakia Skala! This route is 1.5 hours long, of little difficulty and suitable for mountain biking. However, it is recommended to follow routes 6 and 6B (total journey time: 3 hours and 15 minutes) with moderate difficulty.

There has been intense mining research activity in the area of Monastiria, reaching its peak at the end of the 19th century. The main mining site is that of "Kakia Skala" where the oldest systematic exploitation of mineral resources on Antiparos was carried out by the French Lavrion Company. This route is 45 minutes long and is suggested as a follow-up to Route 5. From that point, choose either Route 6A or 6B that leads to the tops of Prophitis Ilias and Agios Georgios respectively. This Route is also of interest to those who choose to take a loop hike combining Routes 6B, 6A and 7, making a slight detour on Route 6 to get to know the mining history of Antiparos. This route is ideal for mountain biking.

Prophitis Ilias, the island’s highest peak at only 300m. above sea level, is truly privileged with overlooking a sheer 15 islands, making it the “vigla" (guard watch) of Antiparos. This 45-minute long trail is part of a loop route combining Routes 6B and 7, but also part of a rather demanding long hike that combines Routes 3, 5, 6 and 7. This route is ideal for mountain biking. Level of difficulty: moderate. From the top of Prophitis Ilias go back to the junction of Routes 6 and 6B to pick a new trail.

This route stretches out on a medium to poor dirt road which is the one used to reach or leave the Agios Georgios holiday resort, depending on the direction you choose to follow. This route makes part of a loop route combining Routes 6A and 7 but also part of a long and demanding hike that combines Routes 3, 5 and 6. This 1-hour long trail is ideal for mountain biking with a moderate level of difficulty.

Route 7: "The Upper Road, across the mountain"

This trail was once the pathway where mules transported people and goods to and from Agios Georgios across the Kampia ridge and forms part of the main axis that connects the southern with the northern part of the island, called the "Upper Road, across the mountain". This route is of medium difficulty, one hour long and forms part of two loop routes that combine Routes 6B with 6A and Routes 6A with 8 respectively. Route duration shown here counts for the Route 7 downhill hike. The uphill hike takes an additional 15 minutes.

This route features the remains of the old iron mine, which operated from 1890 till 1910. The route is of medium difficulty, 1 hour and 15 minutes long. However, it takes an additional 20 minutes to access it. Walking up the dirt road that leads to the start of the trail you arrive next to a beehive. Keep at a safe distance away from it and be sure not to wear any perfume. Perfumes attract bees! It connects with Routes 10 and 6A.

Route 10: "In the footsteps of great travellers"

The Cave of Antiparos is inextricably linked to the history of the place as it has been an important attraction for many visitors since the times of the Great Tours (18th - 19th century). The cave is renown for the oldest stalagmite in Europe (45 million years old) and its rich cave texture. The route starts at Spileo, accessible by bus, is of medium difficulty and takes half an hour. Connects with Route 9.

The southern part of Antiparos is an expanse of volcanic rock formations of special geological interest. Faneromeni bay features typical patterns of volcanic rock cellular decomposition known as “tafoni”. Tafoni’s are formed through intense wind and chemical weathering. Furthermore, this part of Antiparos belongs to the European Ecological Network, Natura 2000, "Paros Islands and Southern Antiparos”, coded GR 4220025 (Special Protection Area). Besides the remarkable geo-/biodiversity along this Route, there is also a number of recluse beaches to relax in cool waters by just making a small detour off the main trail! This route is of medium difficulty, leads to the southern part of the island and back to the settlement of Soros. So the total return hike takes 2 hours and 30 minutes. 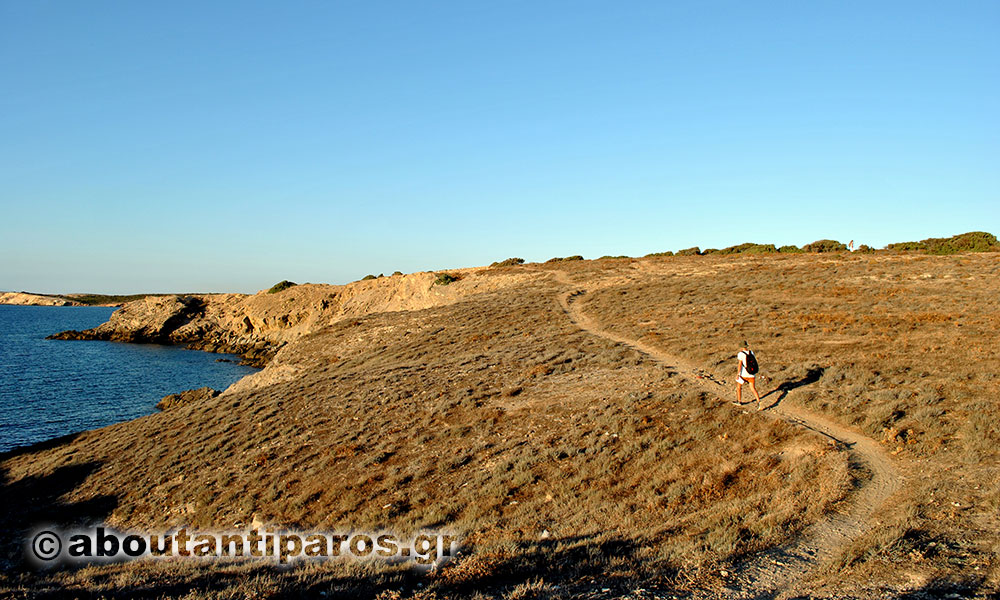 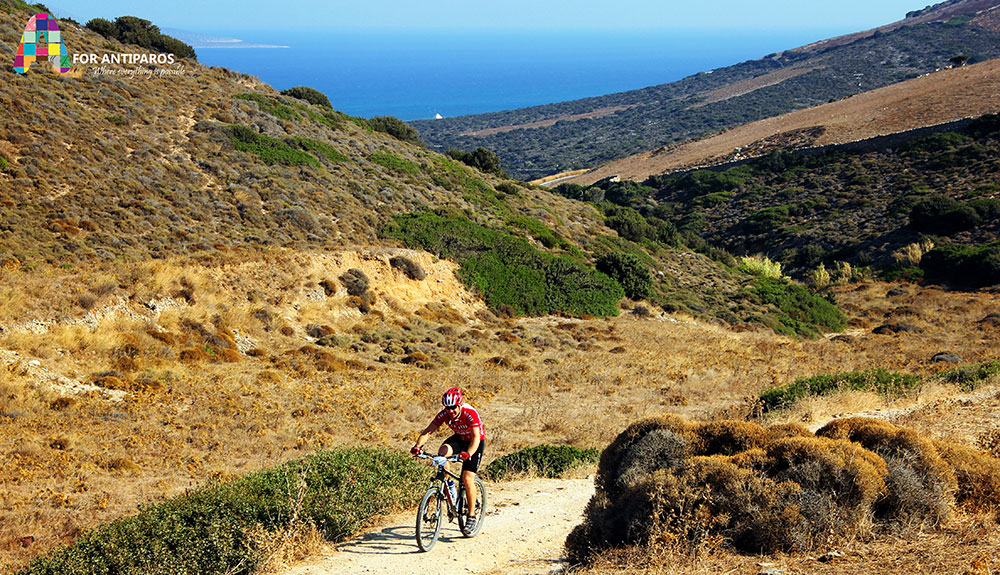 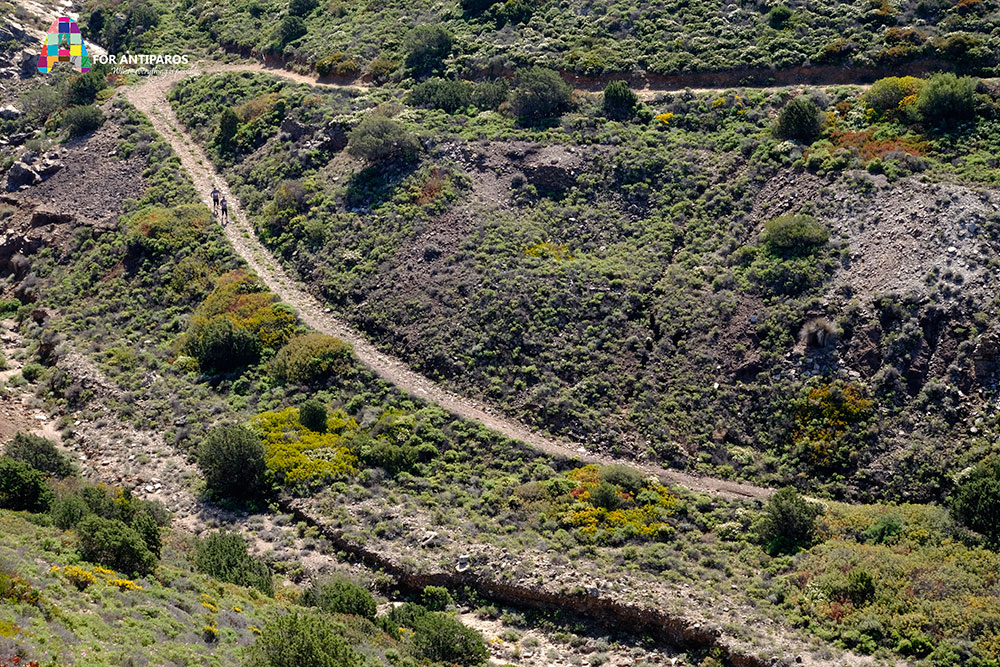