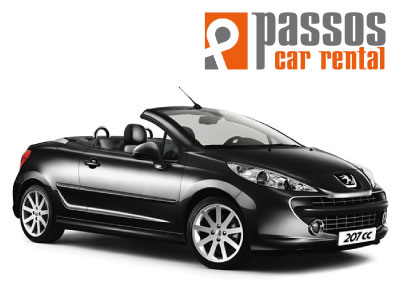 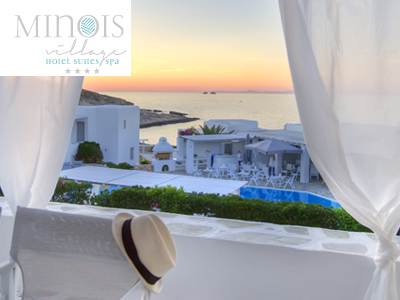 The archaeological sites of Paros

Information on the archaeological sites in Paros

In the 6th century, the City (Poli), which is called today Parikia, was one of the wealthiest cities, full of marble buildings, churches and sights. A typical example of the wealth of the buildings of the ancient city of Paros is the medieval castle.

The first excavations in Parikia began at the end of the 19th century by the German archaeologist Otto Rubensohn, who brought to light the sanctuaries of Delian Apollo, Asclepius, Pythian Apollo, the archaic temple of Athena in the Castle and right next to it, a prehistoric settlement. A big part of the fortification wall of the ancient city of Paros and a small part of the cemetery of the Roman period with marble sarcophagi laying bases have also been brought to light.

The modern city is built on the ruins of the ancient city. 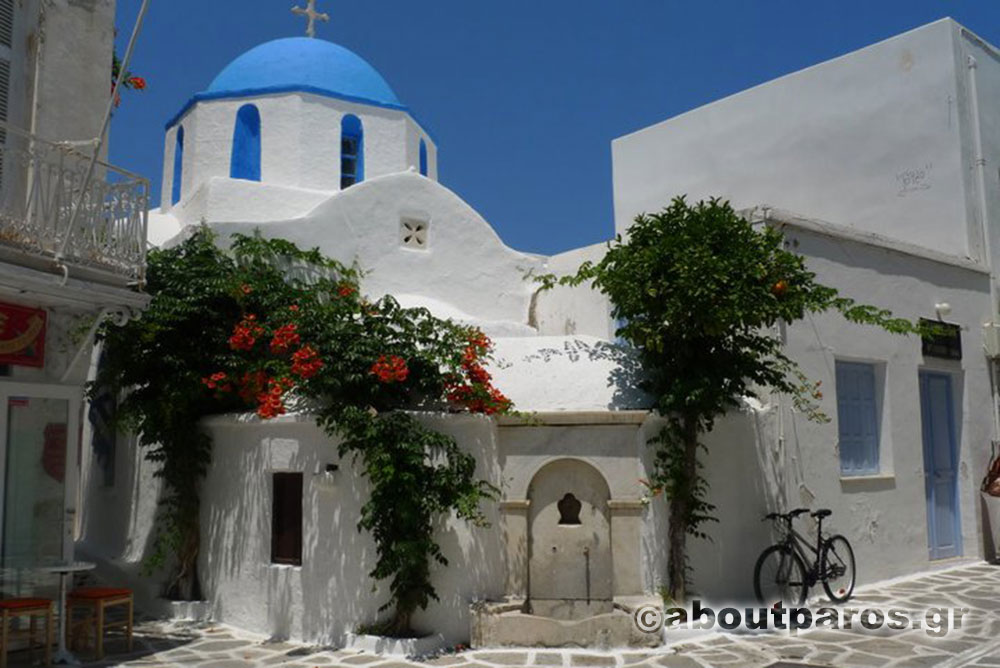 The sanctuary of Delian Apollo

On the top of the hill that dominates at Paros' port and faces Delos, outside Parikia, you will find a sanctuary which is dedicated to Delian Apollo and to Artemis. In the 5th century BC a small marble temple was built. In the temple there was the worship statue of Artemis. The statue is 3.10m in height, it dates back to 490-480 BC and it is housed at the atrium of the Archaeological Museum of Paros.

The sanctuary of Asclepius 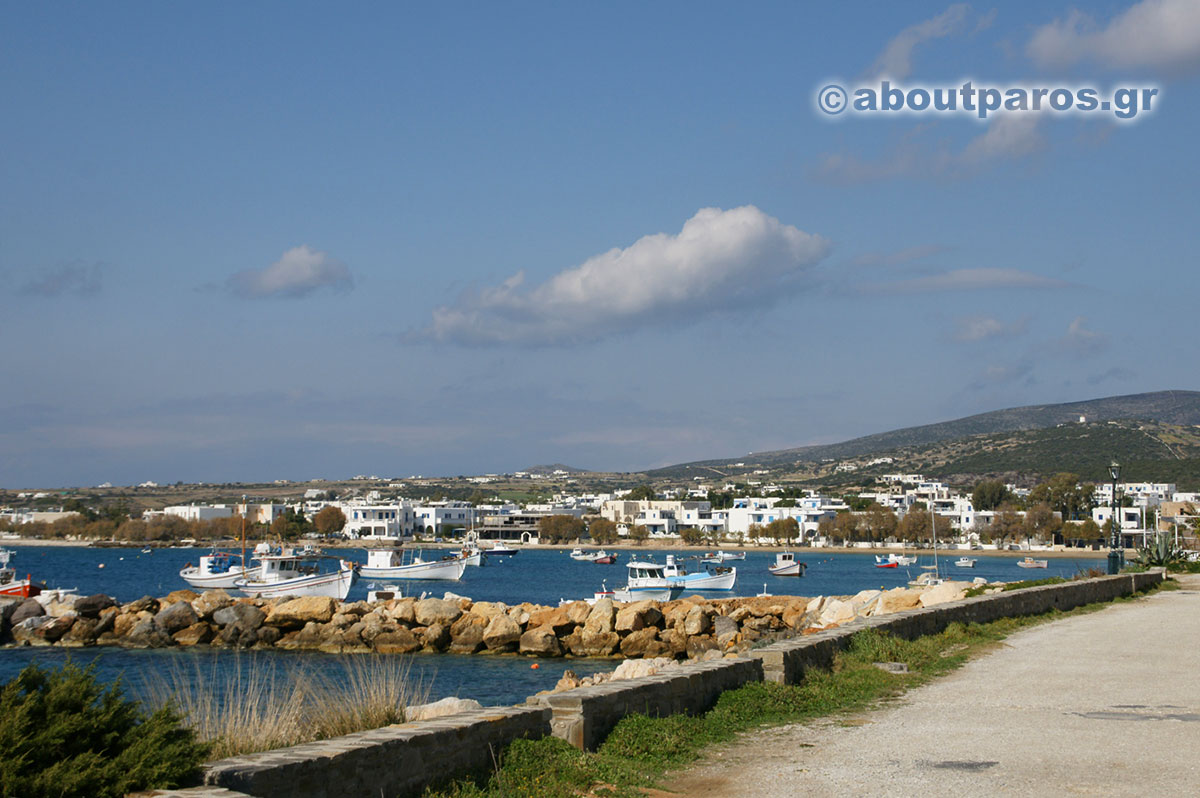 It is composed of a building with an altar situated in the center, two semicircular platforms and two marble cisterns. The whole kouros that is housed today at the Louvre Museum and many more marble votive offerings originate from this site.

At the location Tholos in Parikia, in Paros, an important sculpture workshop was brought to light. Various unfinished sculptures of its apprentices have been found and they prove that this was a sculpture school. At a short distance, a pottery has been found.

It is an admirably organized pottery that used to produce ceramic objects of the Hellenistic times and which is composed of 6 kilns, 2 cisterns and other auxiliary spaces. The street that passes in front of the site was also brought to light as well as the pottery's entrance, two more kilns and a second entrance of another pottery.

For the best protection of the ancient findings it was decided that they should be preserved in a basement, while the site of the ancient workshop was unified by a bridge that was constructed on the street.

At the location "Tris Ekklisies" (=Three Churches), on the way from Parikia to Naoussa there were three churches that dated back to the 17th century, built on the ruins of a big paleo-Christian basilica, which dated back to the 6th century BC and which was constructed of ancient architectural material. During the excavation a capital that dated from the 6th century BC was brought to light with an inscription of the 4th century BC from the monument of the poet Archilochus, a great poet of the ancient times, who came from Paros.

At this site there used to be the Archilochion, a monument in honor of the ancient poet of Paros, where from originate the two glyphs, a panther devouring a bull and a scene of a funeral supper. These findings are exhibited at the Archaeological Museum of Paros.

It is located at the port of Parikia, on the street along the coast. It was used from the 8th BC century to the 2nd century AD. Burials are many and of various types. Due to high child mortality during the ancient times, there are many child burials in cubical graves, in pots (pot burials) or in marble sarcophagi. The majority of the tombs date back to the second half of the 7th century BC. A rectangular construction (mass grave), 7x1,20 m., constructed of shingle with big covering plates, dates back to the 8th century BC. It contains about thirty amphorae, placed straight, one next to the other, which contained cremation remains of dead people. Many amphorae were covered by smaller pots, skyphoi or kylikes.

The excavations that took place in Paros in 2000 brought to light a second mass grave of the Geometric period, which contained about one hundred pots. A headstone has been found in front of the mass grave; it dates back to the archaic times, it is 3m. tall and it marks an important event or a great victory. Regular burials have been found in tombs constructed of tiles or in cremation memorials dating back to the 5th century BC. The ashes were placed into marble pots which were sealed by marble covers, some of which had the name of the dead carved on them.

One of the most important burial monuments of Paros is a column that dates back to the 5th century BC, placed on a step stand, which contained a cremation urn with the inscription NIKO, the name of the dead woman. The same name is carved on both sides of the stand. At the western part of the area, archaeologists found marble sarcophagi with covers of oblique sides (like roofs), which date back to the roman period, placed on marble stands. These are typical Parian sarcophagi and similar ones have been found in Thassos, a colony of Paros. 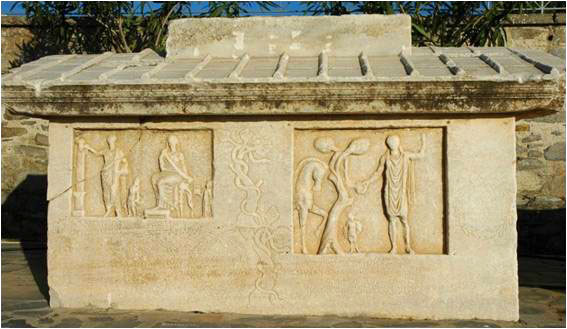 The cemetery was quite large and it probably extended up to the location where Ekantopyliani church is situated. The sarcophagi that are exhibited in the yard of the Archaeological Museum of Paros came from the same cemetery.

A big archaic open rectangular sanctuary of 400 sq.m. in area was found behind the crossroads of Gikas. During the post-Hellenistic period, a roughly-made wall was built over this strong construction. The torso of a marble archaic kouros was built in this wall.

At the neighboring site, archaeologists found the torso of an archaic mermaid, which is exhibited at the Archaeological Museum of Paros.

Other archaeological sites in Paros

At the village Marmara there are interspersed fulcrums of marble pillars that come from a Dorian temple dating back to the Classic period.

At the location Palaiopyrgos, in Ambelas, there is a tower dating back to the Hellenistic period.

At the location "Chalasmata", near Naoussa, a large building has been found as well as a dedicatory inscription of the goddess Demeter the Carpophore.

At the bay of Lageri, there are channels, carved on the natural rock. Similar channels have also been found in other parts of Paros, such as Drios, Rematonissi, Agios Mironas, Santa Maria and in Despotiko in Antiparos.

At the location Krios, opposite to the port of Parikia, there are ruins of a vaulted building. The lower part of the building (up to 6m. from the ground) is preserved and it is built in the rock.

At the location Kounados, on a projection of the natural rock, findings led to the conclusion that this used to be a place of worship of Eileithyia, the goddess of childbirth. 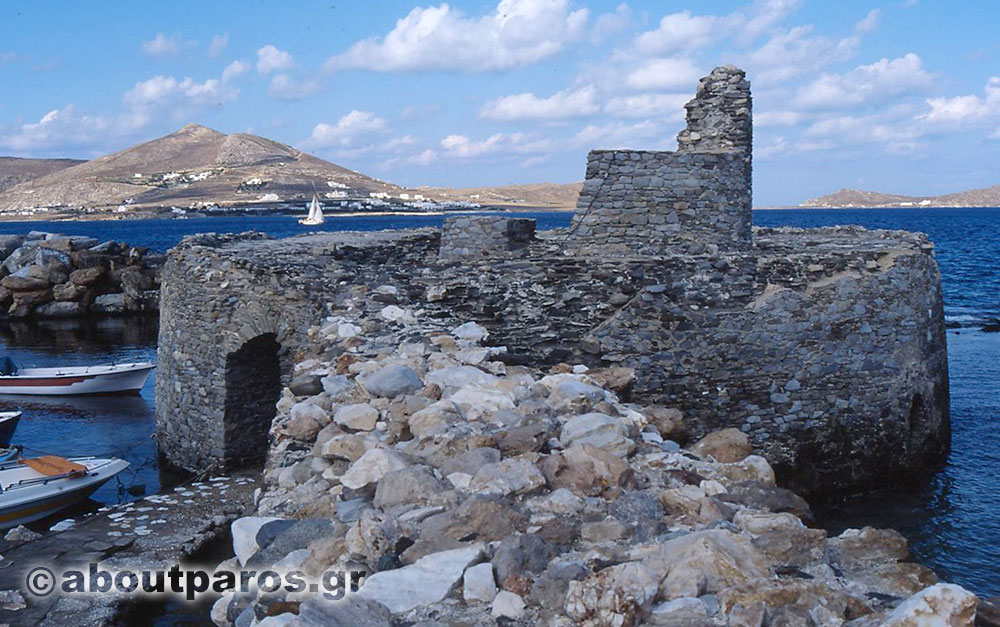 At the location Kastrovouni, archaeologists brought to light building complexes with mosaic floors.

At the location Floga, archaeologists found the ruins of a residency dating back to the 2nd century BC. The findings are preserved in the basement of a contemporary house.